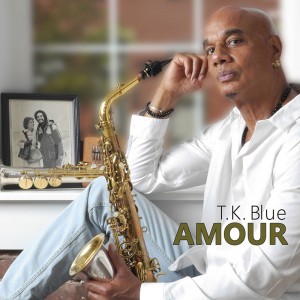 One of the most impressive facets of a jazz musician’s talent is making the hard stuff sound easy. T.K. Blue, a New York-born saxophonist who, in his youth, studied with Jimmy Heath, Rahsaan Roland Kirk and Yusef Lateef, exudes armloads of dexterity and guileless charm on his latest album, Amour. Its 11 tracks, a nice balance of originals and covers, overflow with evidence of a craftsman so in love with his work that it doesn’t even feel like work.

There’s a reason for all that joie de vivre. More than just his 11th album as a leader, Amour is also a tribute to Blue’s time spent in Paris, where the saxophonist lived for more than a decade, and in the process acquired a taste for the musical flavors of Europe and Africa.

While elements of world music are evident at the margins of this disc, the overwhelming emphasis is on swing. Individual efforts contribute significantly to that overall sound. Guest Warren Wolf adds a soft-lens vibraphone solo to the upbeat waltz number “Parisian Memoir,” which makes the song shimmer like a distant memory, and Blue entwines with harmonicist Grégoire Maret for a blistering Havana-on-the-Delta take on John Coltrane’s “Resolution.”