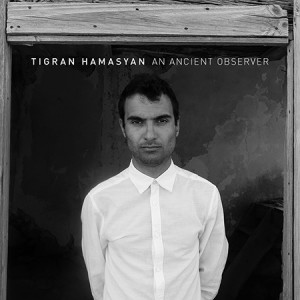 There’s no such thing as the “same old, same old” with Tigran Hamasyan.

The Armenian-American pianist’s last few albums have found him improvising atmospheric jazz in a quartet with trumpet, guitar and sampler; arranging Armenian sacred songs for piano and chorus; and playing with what he described as “an electro-acoustic Armenian rock trio.”

An Ancient Observer, in typical contrast, is mostly solo piano, leavened with occasional vocals and electronics, and consisting both of through-composed and partially improvised pieces. Like nearly all of his work, it’s simply breathtaking.

Subtlety is key. Hamasyan puts so much emphasis on mood and melody that it’s easy to miss how well structured the compositions are, how virtuosic the playing is. Some of this has to do with way the non-piano aspects of the recording are layered in.

“The Cave Of Rebirth,” for example, opens with Hamasyan singing distantly in falsetto along with the piano line. But when the piece shifts to the “B” section, Hamasyan’s vocals move to the fore in multitracked harmony, a trick that underscores the harmonic movement of his arpeggiated piano without undercutting its rhythmic urgency.

At its best, the music recalls the way Ryuichi Sakamoto’s piano pieces seemed to claim a space of their own between classical and pop, marrying the dignity of the former to the charm of the latter. It’s a neat trick, and doubtless something Hamasyan will abandon on his next album.