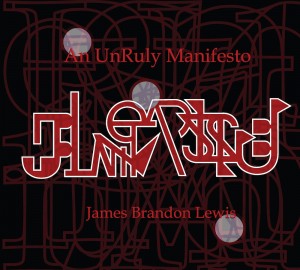 Tenor saxophonist James Brandon Lewis’ manifesto, printed on the album’s inside sleeve, presents unruliness as a movement of authenticity and originality pushing against convention and sameness; of knowledge, depth and regard for an “inner harmony of being” over superficiality and pretense. His quintet makes good on this vision with music that’s by turns intriguing, intense, rambunctious, stately and thorny—yet overall welcoming. United in direction, the band sprawls. For neatness, go elsewhere.

But this isn’t a concept album—it’s a work of immediacy and engagement. Without even offhand reference to spirituality, Lewis leads his ensemble down paths of ferocious polyphony that Albert Ayler and John Coltrane took for transcendence. He’s more secular. Peace, for Lewis, seems to be a matter of grappling with issues in the here and now, a grounded aesthetic stance like that of Archie Shepp or Sonny Rollins.

Having released six albums as a leader—including a 2018 collection of duets with drummer Chad Taylor—since his 2010 debut, Lewis is admired for his unselfconsciously brawny sound and expressiveness. Although shrugging off conventions and ideologies, he embraces the legacy of Ornette Coleman, having studied with Charlie Haden, and marks the influence on “Sir Real Denard” and “Haden Is Beauty.” Mindful of these elders, Lewis flies far, high and gutsy, launching from bold themes, strong grooves, minor modes and rich backgrounds. He encourages all involved to blow, shaping episodes from within, culminating in the “Ascension”-like “Escape Nostalgic Prisons.”

Trumpeter Jaimie Branch, on Lewis’ first album featuring another horn player, stays close to him, adding swaggering gestures, bleats, blurts and Don Cherry-esque clarion calls. The rhythm section, a power unto itself, is back from Lewis’ No Filter. Bassist Luke Stewart, while establishing himself, ably evokes Lewis’ past collaborator, Jamaaladeen Tacuma, as well as Haden. Drummer Warren Trae Crudup III’s slap-happy fills drive the ensemble, his busyness a productive goad. Guitarist Anthony Pirog comes up with fascinating backgrounds, wild effects and sweet leads (for instance, at the end of “Notes”).

Lest we forget jazz was forged by breaking norms, An Unruly Manifesto celebrates the aspirations, complications and results of freedom.