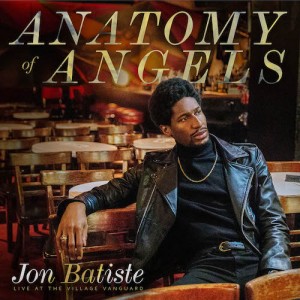 On “Creative,” the first track off Anatomy Of Angels: Live At The Village Vanguard, Jon Batiste packs what seems like eight minutes of music into four. The composition opens with a melodious swing section that leads into a playful honky-tonk jam; a modern, whip-fast riff then takes over, yielding to a soothing ballad section. Each of the pianist’s three originals here are similar: mercurial and improvisatory in feel, erudite and complex in execution. On the second, “Dusk Train To Doha,” he applies blues and gospel languages, encouraging shouts from the audience. And on the title track, Batiste tips his hat to big-band structures with clusters of layered horns, before breaking into an exultant, full-throttle jazz concerto. Recorded at the Village Vanguard, the album captured only a fraction of Batiste’s residency last fall. But two standards made the cut, including “Round Midnight.” It starts as a stealthy reveal of angular hidden corners and morphs into a heavy swing, before slipping into a subtle rhumba. A lone trumpet propels the tune—a musical allusion, perhaps, to Gabriel, the archangel, announcing the approach of divinity.