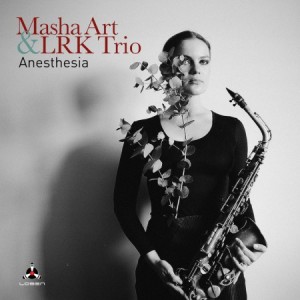 The last song on Masha Art & LRK Trio’s Anesthesia carries the title “Into The Sea (RIP My Sister Anya).” Those mourners among us, forever marked by some private tragedy, might recognize in the song’s denouement the language of disconsolate grief. Above a wash of rolling percussion and listing bass, pianist Evgeny Lebedev interlaces a soaring major-scale harmony with its inverse. For a brief moment, bright hopeful chords clash against discordant chaos until the album closes with the low hum of abandoned strings vacantly vibrating.

It’s a dramatic moment on the group’s third release, its first widely available outside Russia. The album, for the most part, offers listeners the opportunity to hear a tightknit group nail saxophonist and bandleader Masha Art’s compelling compositions. However, Lebedev’s contributions stand out. Like “Into the Sea,” “Painless” displays his uncanny ability to render emotions that, on impact, feel almost painfully personal. It opens with a slow, staccato refrain. Art goes first, articulating notes purposefully, letting them resonate. Her solo luxuriates in the song’s melancholy. Lebedev follows and opens with a few expansive chords before charting a simple melody that unfolds with the logic of a folksong or a lullaby. Then, as Ignat Kravstov’s percussion tightens around him, he reveals these grey-washed, pastoral chords. They arrive like the previous melody’s solemn shadow.

The writing and performances on Anesthesia make it worth a listen, but Lebedev’s contributions make it an even rarer find. It’s an album with a lot to say, but even more to show.