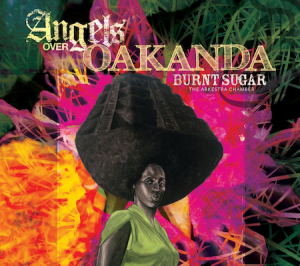 The latest salvo of this shape-shifting New York juggernaut led by writer and theorist Greg Tate and electric bassist Jared Michael Nickerson sounds both familiar and alien, a dense sonic cauldron of fever dreaming. Tate led an ongoing reappraisal of Miles Davis’ early-1970s output through his trenchant critical analysis nearly three decades ago, and that body of work has been a keystone for the Burnt Sugar sound.

Tate has led the ensemble by embracing the conduction methods of Lawrence “Butch” Morris, and that procedure is palpable on this recording’s epic title track, where he shapes groove, texture and lyric evocation while his versatile cast makes hay from the written material. “Repatriation-Of-The-Midnight-Moors” is built from the same irresistible rhythm track that forms the backbone of “Lisala Over inna-Oakanda,” where a rapidly descending bass line by Nickerson and a shuffling Double Dutch/reggateon hybrid groove serve as an armature for disparate investigations. The former was crafted by producer and drummer Marque Gilmore, where his slinking 12-minute track is embroidered by meandering flute improvisation and pile-driver synth swoops, while guest singer Lisala Beatty brings an insouciant soulfulness to the latter. Nickerson’s coolly simmering “Oakanda Overdrive” is a jazz-oriented jam driven by the cosmic Fender-Rhodes of Leon Gruenbaum and polished by punchy horn charts, dense polyrhythm and the composer’s roomy low end.