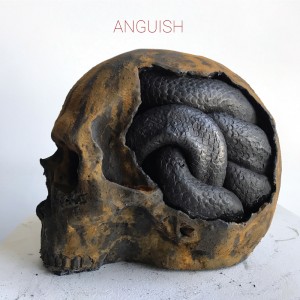 Anguish is drawn from diverse and unexpected quarters, although bandmembers, despite arriving from different musical backgrounds, all are likely to find themselves nestled together on any extremist’s record shelves. Combining musicians from krautrock titans Faust, hip-hop agitators dälek and rowdy jazzers FIRE! delivers a spiky and raucous mélange of distressed sounds, brutal repetitions and complex textures.

The mood is established straight away on the opening instrumental dirge, “Vibrations,” with its squalid electronics and squalling tenor. On the second track, “Cyclical/Physical,” the microphone prowess of dälek’s Will Brooks takes command, as the MC skates over razor guitar figures, spitting well-sculpted lines at a rapid pace. Abrasive atmospherics abound, with all players—apart from drummer Andreas Werliin-—contributing electronics or effects, making it difficult to discern the boundary of contributions from Faust’s Hans Joachim Irmler. “Gut Feeling,” though, is comparatively direct, with Brooks rapping over a slow, repetitive juggernaut. Saxophonist Mats Gustafsson turns in a relatively gentle performance on the swirling “Healer’s Lament,” with Brooks’ poetic lines emphasized by his crawling delivery. The saxophonist returns to bellowing for the brief looped attack of “DEW,” while Irmler is dominant on “A Maze Of Decay,” spewing distorted electro-matter on a track that equally illuminates ensemble members’ individual expertise.