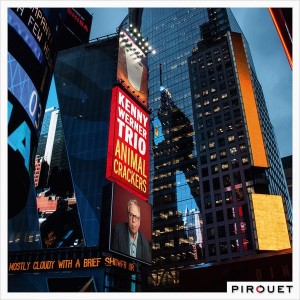 Pianist Kenny Werner’s trio with bassist Johannes Weidenmüller and drummer Ari Hoenig has been together for 18 years, and Animal Crackers benefits from the powerful chemistry the group has forged during that time. The trio has reached a comfort level that allows it to approach improvisation as spontaneous composition, like a group consciousness that opens the players’ ears to possibilities beyond the conventional practice of running lines and patterns. One of the trio’s favorite activities, according to Werner, is turning a standard into a composition all its own. This is clearly evident in the gleeful ways the musicians dissect, expand and transform old favorites like “The Song Is You,” “If I Should Lose You” and “I Should Care,” defying expectations in a brainy but delightful manner. The mood is darker on Werner originals like the minor-key “Ari” (written around a rhythm Hoenig created for an arrangement on one of his own albums) and the avant-funky “What?,” one of several places on Animal Crackers where Werner adds a tasteful touch of synthesizer. The title track, another Werner composition, skips along playfully while spiraling into the treacherously deep woods of twisted time and vague tonality. Two tunes credited to the entire trio—“Breathing Torso” and “Mechanical Arm”—show just how well these three bandmates jell when the charts are put away and spontaneous composition is given free rein. The Kenny Werner Trio is currently on a European tour, with upcoming concerts on Dec. 6 at Pizza Express in London; Dec. 7 at Duc des Lombards in Paris; and Dec. 8 at Porgy & Bess in Vienna, Austria.