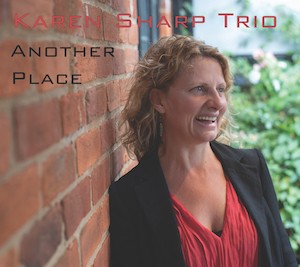 An easygoing, straightahead venture, Another Place is a fitting title for Karen Sharp’s latest effort. The U.K. saxophonist, a member of the Nikki Iles Jazz Orchestra, has pared down to a trio forged after a few nights together on the bandstand, allowing room for each player to roam.

A take of Lee Kontiz’s “Thingin’” might be the record’s hardest swung moment as Sharp weaves through the buoyant melody with a faint growl curling along the edge of her tone before giving way to a delicately drawn turn from guitarist Colin Oxley. His light and bright touch also provides a sterling start for Antonio Carlos Jobim’s “Caminhos Cruzados,” which marks one of Sharp’s two ventures into bossa nova; the other being a breezy sway through Clare Fischer’s “Pensativa.” Works by Steve Swallow and Bill Evans sit alongside these other choice interpretations.

Though there are originals here as well—including “To Billy And TM,” bassist Simon Thorpe’s heartfelt tribute to Billy Strayhorn and Thelonious Monk—the overall mood tilts toward a deeply held reverence for classic material. Even Sharp’s lone composition, the appropriately indigo-shaded “My Blue Jacket,” originally was written for the late English trumpeter and presenter Humphrey Lyttelton, whose band Sharp joined early on in her career.

With such an emphasis on taste, space and mood, there’s not a lot here that’s going to blow your hair back or set your ears on edge, if that’s what you’re looking for. But there’s something satisfying in the record’s clean lines and thoughtful understatement.