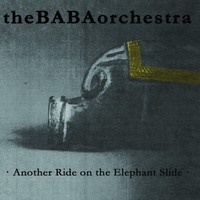 Lauren Elizabeth Baba wants to disabuse anyone of the notion that all L.A. jazz is of the smooth persuasion. As the composer, conductor, bandleader and producer for her 17-piece big band, theBABAorchestra, she’s establishing adventurous new territory. Recorded live at Seahorse Sound Studios in Los Angeles, the band’s debut, Another Ride On The Elephant Slide, melds elements of free-jazz, avant-garde classical, drone rock and Middle Eastern folk music. Fans don’t turn to this band for pretty melodies. But that doesn’t mean the music isn’t infectious. On “The Myth Of Sysphis–Movement 2,” a head-bobbing groove emerges, as the bands transitions from unleashing growling waves to locking in and galloping like a chariot. With skillful use of her composer’s pen and her conductor’s baton, Baba crafts intricate, hypnotic tracks that frequently offer a surging momentum. Her music often has an undulating motif that contributes to the sonic bedrock, paired with complex intersecting lines in the aural “middle,” and then technically impressive soloing on top of those two layers. The striking solos might come from one of the band’s four trumpeters or another member, such as guitarist Gregory Uhlmann. Baba’s palette is broad: Segments of select tracks have very spare instrumentation, while other numbers are wildly dense, merging disparate parts but without teetering into sonic chaos. Baba, the recipient of an ASCAP Young Jazz Composers Award, is an artist to watch, especially for fans who enjoy the intersection of big band instrumentation and avant-garde experimentation.