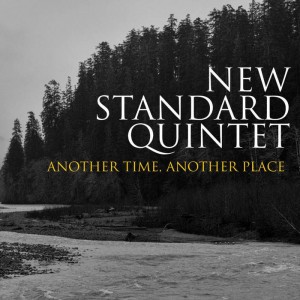 Composition plays a priority role in Ken Partyka’s New Standard jazz groups. The Chicago-based saxophonist crafts magnificent charts for large and small ensembles, as on the New Standard Jazz Orchestra’s 2016 album Waltz About Nothing (OA2) and the New Standard Quintet’s 2011 debut, The Many Faces (CD Baby/New Standard Music). And he consistently includes contributions of original material penned by band members in his studio recordings and live sets. That’s part of what gives the New Standard Quintet (like its counterpart the New Standard Jazz Orchestra, a contemporary “writing” big band formed in 2013 and co-led with trombonist-composer Andy Baker) such a strong collective voice. So it comes as no surprise that the quintet’s newly released Another Time, Another Place, a seven-track program consisting entirely of originals by Partyka, pianist-keyboardist Tom Vaitsas and guitarist Pat Fleming, gets high marks for its compositional ambition, delightful melodic content and sheer originality. But that’s only half of what gives Another Time, Another Place its wide-ranging appeal. Let’s not forget the extreme sensitivity to musical detail and the impassioned, advanced soloing at work as the musicians mindfully weave in and out of a multitude of genres on the jazz-and-blues spectrum. The sheer confidence revealed in their extended blowing demonstrates just how intimate these guys are with their own material, arrangements they have shaped together over years of gigging as a working group. It’s clear throughout Another Time, Another Place that all five of these Chicago A-listers — bassist Curt Bley and drummer Todd Howell among them — are deeply invested in, and have thoroughly digested, this dynamic, highly original repertoire. Fleming’s “Go Down Gamblin’” opens the album with some feel-good swing in 5, though that doesn’t stop Partyka from bopping all over the place at the peak of his extended soprano solo, nor Vaitsas from invoking Adderley-era Joe Zawinul on Fender Rhodes, nor Fleming from indulging his proclivity for prog-rock tones and outside constructions. Indeed, Another Time, Another Place deals in odd time signatures and processed sounds common to more contemporary forms, but approaches the music’s more modern aspects with an easygoing, old-school attitude. The Partyka-Vaitsas tune “The Guy In The Corner” is a second-line driven celebration of funkiness and inclusion fueled by an infectious groove and distinguished by Partyka’s contemporary-soul alto wailing. A major highlight of this November 2018 session is the title track, whose entrancing ancestral drones enchant the listener with dreams of other places and other times, a fitting context for Partyka’s resonant tenor to call out in what feels like communication with ancient communal voices. Guest artist Kalyan Pathak enlivens three tracks with his signature brand of percussion magic, most notably his expressive tabla contributions to the title track. He turns to his arsenal of congas, bongos and tambourine to summon a syncopated Mardis Gras spirit on “The Guy In The Corner” and employs cajon to help cement the steady, tango-like pulse of “Belle Of The Ball.”