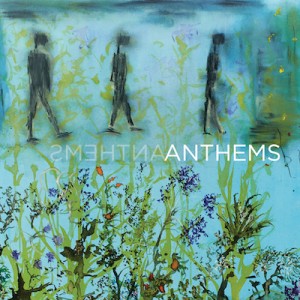 The most compelling thing about the sound of Caroline Davis’ alto saxophone is the way it lingers. She doesn’t just play notes, but inhabits them. So, even the briefest of passing tones is given its due as it progresses to a phrase’s conclusion. It’s a very deliberate style of playing, and one that justifies the title Anthems without making it seem like a challenge.

It helps that the title tune, with its stuttering, staccato theme, plays against type, offering not so much heroic uplift as hesitant urgency while the band works through the melody’s glitchy rhythms. Without a background beat, the accents carry a sort of randomness, which is reinforced by the suddenness of the ending, which feels as if Davis simply had shouted, “Stop!” Four tracks later, there’s a reprise of the tune; this one is not only more legato, but grounded by Jay Sawyer’s metronomic snare. With that through-line in place, it’s easier to appreciate the rhythmic eddying of the improvisation, as Rob Clearfield’s Fender Rhodes messes with chords and Sam Weber’s electric bass skitters beneath Davis’ alto. Again, the ending is abrupt, but this time, it’s easier to hear the build-up. Together, the two versions seem less like bookends than two samples from a universe of possible “Anthems.”

Anthems is full of thoughtful interplay between melody and rhythm, and the best thing about the album is that however much theory goes into the writing, the music never sounds contrived or mechanical. “People Look Like Tanks,” for instance, has each of the four members working off different rhythmic concepts: the piano like a syncopated Philip Glass, the bass moving so slowly it seems like a half-tempo countermelody, the drumming so spare it’s as if he weren’t allowed more than two beats per bar. And yet, the pieces jell perfectly beneath the wistful questing of Davis’ alto. Selfless and deep, it’s the sort of playing that speaks to the connection these musicians feel, and the intelligence with which they go about making music, qualities that mark this as a band to watch.