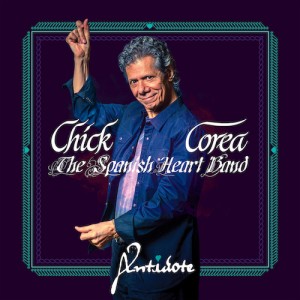 The man who wrote “Spain,” and recorded My Spanish Heart and Touchstone, is a man who is serious about the possibilities of marrying flamenco and jazz. He’s returned to these possibilities regularly during his career, but 1982’s Touchstone was Chick Corea’s last album-length exploration of the concept. Nearly 40 years later, Antidote brings them roaring back, much of the recording revisiting tunes from Corea’s prior “Spanish” albums. As if to leave no doubt about his seriousness, though, he incorporates a flamenco dancer, Nino De Los Reyes, to act as a virtuoso percussionist.

The presence of his Fender Rhodes and synthesizers remind listeners that Corea is, as ever, a fusion pioneer. But Panamanian singer Rubén Blades’ appearances on “Antidote” and “My Spanish Heart” make use of sonorities and rhythms that draw from Afro-Caribbean cultures, not Europe; “My Spanish Heart” also places Afro-Cuban clave front-and-center. Then there’s the Brazilian “Desafinado” and “Pas De Deux,” a snippet of a Stravinsky ballet.

Corea presents it all as a unified package, and it all works, primarily because of his distinctive pianistic presence, along with Jorge Pardo’s flute and Niño Josele’s sublime guitar. Even with their fine solos on “Duende” and “Armando’s Rhumba,” trumpeter Michael Rodriguez and trombonist Steve Davis often seem like window dressing, supplemental, mostly ensemble colors for the heavy lifting that Corea, Josele and Pardo are doing on tunes like “Zyriab” and “Admiration.” It’s not just the horn players; even the dance interlude on “The Yellow Nimbus (Part 1)” sometimes comes off as glorified accompaniment for flute, piano and guitar.

Antidote also suffers from its inevitable (and apparently, given the band’s name and repertoire, desired) comparison with its flamenco-ridden predecessors. My Spanish Heart and Touchstone displayed the thrill of discovery and daring. But there’s a certain diminished audacity on the just-over-a-minute intro to “My Spanish Heart,” featuring an overdubbed choir of voices (all courtesy of Gayle Moran Corea, the bandleader’s wife), and restrained passion from all involved on “My Spanish Heart” proper. The rest of the recording consists of bland professionalism, the work of confident technicians who feel no pressure to play at the edges of their abilities. The most bravura runs, like Corea and Josele’s fast unisons on “The Yellow Nimbus (Part 1),” recycle passagework the bandleader has done thousands of times with Return To Forever or his Elektric Band.

Corea is incapable of less-than-solid, competent work, and Antidote is no exception. But its flamenco seasoning lacks zest.