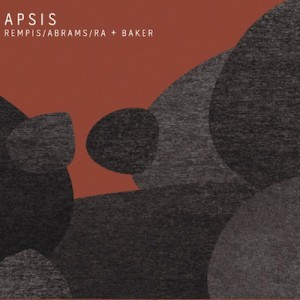 As heard on the 2016 recording Perihelion, the hard-charging Chicago improvising trio of saxophonist Dave Rempis, bassist Joshua Abrams and drummer Avreeayl Ra deftly incorporated the piano abstractions of Jim Baker in stride, which complemented the core unit’s increasingly cohesive onslaught with a carpet of fractured sound.

That extended three-track recording was captured live during the first meeting of the trio and the keyboardist. Despite the band name, which suggests Baker is just a guest, during the past several years he’s actually become a fixed member of the ensemble, and his steady involvement reaps serious dividends on the quartet’s latest recording, Apsis.

Each party sounds significantly more comfortable and locked-in now on both the most visceral, fiery exchanges, and, more significantly, during less frenzied and more ruminative stretches.

But there’s plenty of heat on “Exedra,” with Rempis blowing characteristically cranky, striated baritone lines, flush with gnarly split tones. Baker’s moody blanket of two-fisted runs functions as a counterbalance, not so much tamping down chaos but enhancing it with an insistent presence that points toward other paths. His patterns and Ra’s explosive flurries take pressure off Abrams, who uses the release to toggle between tangles of plucky pizz and solemn low-end grounding to provide something far beyond the instrument’s anchoring role.

Both of the album’s tracks are extended journeys that ebb and flow organically, but “Mithrab” is particularly gripping, delving into a reflective, levitating vibe, even as the saxophonist rips into the tenor’s scalding upper register and Ra spreads punishing snare explosions. Baker switches to ARP synthesizer here and lays down long tones that morph and shimmer psychedelically.

But the 36-minute epic’s general low simmer belies an intensity and interactive brilliance that’s never been more effective. The most restrained, hushed performance in the group’s history is also its most powerful and promising.