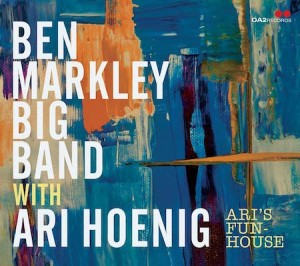 Pianist-composer-arranger Ben Markley completely immersed himself in the music of drummer Ari Hoenig in conceiving and orchestrating Ari’s Funhouse, a big band celebration that’s as thrilling and cool as taking a deep dive in someone else’s pool. Markley and his marauding crew had permission to pool-hop, of course; they even invited their host to play in the band, closing the circle on a truly authentic collaborative project connecting the bandleader and his boisterous sidemen with the titular artist-composer, whose presence amounts to an all-enveloping guiding light. It all began with a gig Markley played with Hoenig at the 2019 Tarleton Jazz Festival in Texas. While prepping for the show, the pianist discovered a depth of melodicism and harmonic sophistication at work amid the rhythmic brilliance of Hoenig’s compositions. Recognizing the Brooklyn-based drummer’s unique compositional voice as a gold mine of material ripe for a big band romp, Markley decided to go all in, transcribing Hoenig’s solos, internalizing his vocabulary and memorizing entire tunes via repeated listening. The two began corresponding regularly, and soon Markley was bringing his own creative voice to bear on Hoenig’s critically acclaimed oeuvre of rhythmically advanced, highly exploratory compositions. Both were so pleased with the fruits of the joint project that they recruited an ensemble of Denver-area players to perform the material live and document everything in the studio. Ari’s Funhouse covers a lot of stylistic ground, from traditional big band swinging to time-twisted excursions into advanced modernity, while focusing a well-deserved spotlight on Hoenig’s voice — like a shining sun around which all the fun and action revolves.