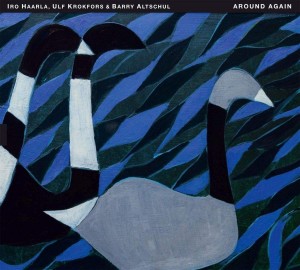 Ideally, a songbook tribute album shouldn’t have the listener agree, “Yes, this is great writing,” but instead think, “Wow, I never understood these songs that way before.” In other words, the idea is to strive for revelation—which is precisely what Finnish pianist Iro Haarla delivers with Around Again: The Music of Carla Bley—not confirmation.

The focus here is on Bley’s earliest work, back when her tunes were being recorded by the likes of Paul Bley and Jimmy Guiffre. What Haarla and her trio grasp is that these pieces were centered not on harmonic structures, but on melody. In that sense, Bley’s writing was not unlike Ornette Coleman’s, in the sense that the compositions provided theme and mood, but didn’t lock the players into some set harmonic schema.

Haarla is suited ideally to this approach, as her playing tends to be lean and linear, emphasizing the melodic lift of a line, more than its harmonic weight. She brings an almost heartbreaking lyricism to melancholy cadences of “Ida Lupino,” and makes “Utviklingssang” sound like the Nordic folk song it should have been.

But it also helps that her playing leaves plenty of room for her bandmates. Bassist Ulf Krokfors, a longtime collaborator, is particularly on point, offering thrumming, contrapuntal lines that at their best evoke the empathetic warmth of Charlie Haden; his intro to “Vashkar” is particularly affecting. Meanwhile, Barry Altschul—who, as the drummer for Paul Bley’s trio, was heard on the first recording of many of these tunes—sticks to the quiet side of his polyrhythmic approach, keeping the energy up but the dynamics down through hushed flutters of brushed cymbals or tom-tom patterns that rumble like distant thunder. Between them, their lean, cohesive approach makes even the most familiar of these tunes sound fresh and exciting—just what any fan would want from a tribute album.