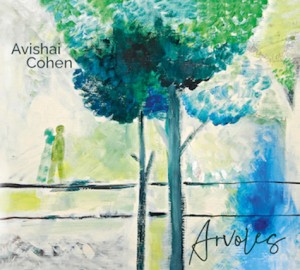 Because Avishai Cohen’s previous outing—a 2017 album titled 1970 (Sony)—was his most commercially successful release thus far, one wouldn’t blame him for revisiting a similar artistic wellspring. Instead, for his 17th leader date, the bassist went in another direction, recruiting an entirely different set of musicians for the deeply personal, nostalgia-fueled Arvoles.

Half the program here consists of trio recordings with pianist Elchin Shirinov and drummer Noam David, and on the other half, the band expands to a quintet with trombonist Björn Samuelsson and flutist Anders Hagberg. It’s all original compositions, with the exception of “Arvoles”—a traditional tune with a title in the Ladino language that means “Trees.”

In concert, Cohen can become a muscular machine of pure propulsion. On this studio album, however, he demonstrates an admirable musical diversity. His arco work adds wondrous, subtle texture to “Childhood (For Carmel),” a lovely, slow ballad. The arrangement for another ballad—the title cut—features a lot of space and poignant pauses to heighten the drama, with the leader’s conversational playing style evoking human speech. “Wings” has a touch of swing and includes a bass solo that finds Cohen shining brightly without grandstanding. “Simonero” features a piano riff so infectious that the tune could be the theme song to a hit sitcom.

Elsewhere, a tempered dose of sentimentality flows through the trio tune “Nostalgia,” spiced by a knotty piano motif, as well as the brief “New York 90’s,” featuring a triumphant trombone tone. With Arvoles, Cohen shows he’s forceful enough to melt your mind with a pounding rhythm—but tender enough to showcase his mother’s paintings in the CD packaging.

Cohen will highlight material from Arvoles during a quintet concert on Aug. 25 at the Red Sea Jazz Festival in Eilat, Israel.