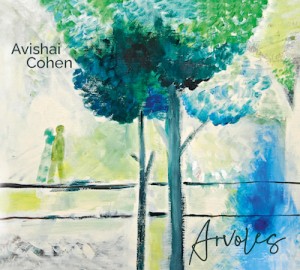 Bassist Avishai Cohen was one of the early Israeli improvisers to break into the 1990s New York jazz scene. And with Arvoles, he’s crafted a thoughtful collection of intimate originals that evokes a wistful circling back to the music he honed as a mainstay of the scene.

Coming on the heels of 2017’s introspective, pop-infused 1970, Arvoles confirms that, despite his success as one of his generation’s first-call bassists, Cohen still can bring the same energy to the music that he did as a hungry 20-something scrapping for gigs. The new recording maintains a sense of freshness through fruitful collaboration: drummer Noam David shines in the driver’s seat of Cohen’s grooves, powering some of the album’s most exciting moments, while pianist Elchin Shirinov’s effervescent pianism provides emotive flourishes above the precise harmonic foundation. The trio’s joined by trombonist Björn Samuelsson and flutist Anders Hagberg on about half of the tracks here, providing balance and darker timbres in the horn lines.

Except for the title track, a Ladino folk song, the album consists entirely of original melodic material from the bandleader. Cohen ably takes the listener through a diversity of groove orientations and harmonic frameworks, from the lilting jazz waltz “Gesture #2” to the pointillistic “Elchinov.” The closing track, “Wings,” a joyful swing romp, brings the album back to a feeling of rootedness, reclining in the pleasures of straightahead jazz that Cohen’s connected with so deeply throughout his career.