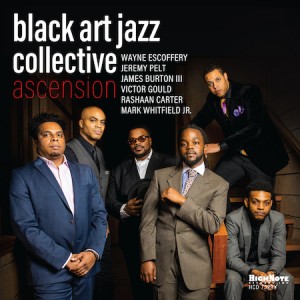 In nearly every sense of the word, democracy reigns on Ascension. The Black Art Jazz Collective is an evenly balanced sextet, three in the rhythm section and three horns up front. And apart from Jackie McLean’s “Twin Towers,” that equanimity is almost shared in the compositions and solos.

Pianist Victor Gould’s ostinato on the album’s title tune is an invitation to his cohort to show their wares, and saxophonist Wayne Escoffery and trumpeter Jeremy Pelt eagerly oblige, the contours of their creativity never far from Gould’s harmonic layers or drummer Mark Whitfield Jr.’s rippling tempi. On “Involuntary Servitude,” there’s a full ensemble effect that’s topped off by Whitfield’s rapid-fire conclusion; Pelt’s power and imagination, as elsewhere, are ever-present spices. “No Words Needed” is the shortest tune here and the only ballad, but it lacks none of BAJC’s togetherness, the band being gifted with a resonance that characterized Miles Davis’ prime ’60s quintets. Think ESP. Better yet, think BAJC, because the ensemble has an eye on tradition, a feel for the past’s turbulence and a way of looking back as they forge ahead. It’s something their Afrocentric forebears called “sankofa.”