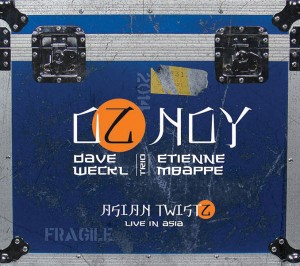 Well known on the New York scene for his scintillating six-string abilities along with his penchant for deftly dancing on his string of effects pedals on stage, the Israeli-born guitar slinger performs tunes from his two-volume Twisted Blues set in live shows from a tour of Shanghai and Thailand in 2014. Accompanied by super drummer Dave Weckl and virtuoso electric bassist Etienne Mbappe from John McLaughlin’s 4th Dimension Band, this power trio outing carves out its own unique niche in the same way that Jeff Beck’s Blow By Blow did 40 years ago. That fusion aesthetic is perhaps best represented here by their intense rendition of Eddie Harris’ “Freedom Jazz Dance.”

Aside from his obvious chops on the instrument—from his blues-inflected single note lines to his accomplished chord melody skills—Noy has an uncanny ability to rapidly shift from clean to dirty tones, sometimes from bar to bar, to give the impression of two distinctly different rhythm and lead players on the same track, as on the opening “Get Down.” His skillful manipulation of tones on searing solos, from Hendrixian wah-wah and backwards guitar effects on “Get Down” to all manner of otherwordly effects on “Downside Up,” add to his envelope-pushing vocabulary.

His lazy second-line groover, “Rhumba Tumba,” shows the nexus of N’awlins and Havana, while the tough Texas shuffle “Whole Tone Blues” treads on Stevie Ray Vaughan territory. Noy reveals his lyrical side on the spacious and unaccompanied ballad “Twice In A While,” then goes for the jugular on the funky “Just Groove Me,” which has him channeling his inner Leo Nocentelli of The Meters. The extraordinary Mbappe, who showcases his chops throughout, is prominently featured on “Slow Grease.” And Weckl fans are in for a treat with his extended solo on “Steroids.” Asian Twistz is a hard-hitting offering that may contend as DIY record of the year.