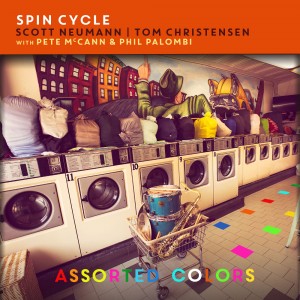 The second album from New York-based Spin Cycle is even more streamlined and in-the-pocket than the piano-less quartet’s 2016 self-titled debut, which earned critical praise for its bold braininess, infectious catchiness and broad stylistic range. On Assorted Colors, drummer Scott Neumann and tenor/soprano saxophonist Tom Christensen—the group’s co-leaders and primary composers—gracefully explore the continuity of jazz expression while embracing a diverse assortment of music genres. With bassist Phil Palombi and guitarist Pete McCann on board once again, Spin Cycle gets straight to the heart of the matter.

From the moment the group dives head-first into the leadoff track, the playfully angular and hard-swinging “Break Tune,” the intensity never relents, until Christensen completes his exhilarating tenor workout on the athletic closer, “Fit Bit.” Even the more subdued numbers, like the minor blues “Possum Dark,” the minimalist “Mist” and the gentle ballad “Third Floor,” smolder beneath the surface. Characteristics that made the group’s initial release so appealing—strong melodic hooks, rock-solid grooves, advanced harmonies and aggressive, deftly executed improvisations—have been refined by two years of intensive touring and are displayed even more cohesively on Assorted Colors. With this sophomore release, it’s clear that Spin Cycle is on a roll, with momentum to spare. (Spin Cycle will perform an album-release show at Smalls in New York on April 13.)