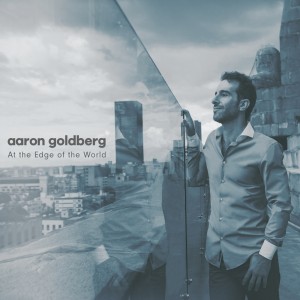 Pianist Aaron Goldberg’s At The Edge Of The World is a global-in-scope outing that features a pair of compositions from the songbook of vibraphonist Bobby Hutcherson.

Goldberg not only ventures out into the world here, he dares to reprise “Poinciana,” a tune inextricably linked to Ahmad Jamal. But the pianist and his trio demonstrate an uncommon verve for the tune, issuing fresh harmonic and rhythmic intensity. “Black Orpheus (Manha De Carnaval)” features an understated samba beat, but with percussionist Leon Parker’s wordless sounds—a mixture of Al Jarreau and Bobby McFerrin—a festive mood of Bahia is evoked. The two-fisted, swinging Goldberg dazzles on “Luaty” and “Isn’t This My Sound Around Me,” then sonorously eases into Hutcherson’s “When You Are Near.” But if the group’s cohesion has a special moment, it’s on McCoy Tyner’s “Effendi.” Its groove and each player’s ability to take cues from one another is emblematic of a sturdy hard-bop lineage. The album’s global feel is brought full circle on “En La Orilla Del Mundo” and “Tokyo Dream,” Goldberg using repeated riffs to structure his solos. It’s enough to make listeners look forward to another journey with such an engaging pianist.