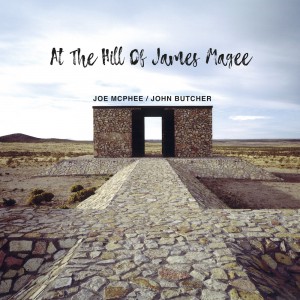 Given the respective reputations of saxophonists Joe McPhee and John Butcher in the field of outer limits sound exploration, it’s fitting that At The Hill Of James Magee, a 2010 recording just now seeing release, finds the duo collaborating—for the first time—not just on the edges of sound, but near the edge of civilization. The titular structure, consisting of four buildings connected by a series of paths, where this album was recorded is a quasi-fortress in West Texas’ Chihuahuan Desert.

That both players are aggressive in exploring the unique acoustic opportunities should almost go without saying. The opener, “Sometimes Yes, Sometimes No,” uses space most explicitly, with each saxophonist traversing the monument’s long walkways and the recorded stereo spectrum, crossing each other’s path and ending opposite where they started.

The alternating solo tracks that follow aren’t as explicit in this regard, but still impacted by space. Unconventional locales are Butcher’s bread and butter, and he bounces percussive blurts and hard-angled tenor trills against The Hill’s natural slapback. McPhee’s alto is a more tender thing, even at its most oblique. But he’s no slouch when it comes to letting his tone dance off Magee’s iron doors and shale rock. The album ends with a shorter duet, “St. Ida’s Breath (Less Her Neck And Teeth),” a tune as pensive as it abstract, the desert wind serving as a tentative collaborator.

Dedicated fans of either player won’t be too surprised by what they do together here. Nor will they be disappointed. Like any great improvisers, McPhee and Butcher are as much masters of deep listening as they are of extended techniques, and here, they bring all those skills to bear.