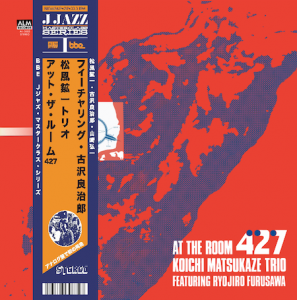 The Barely Breaking Even label has released a trio of killer compilations of Japanese jazz the last few years, and supplemented those with reissues of noteworthy individual albums, most of them impossibly rare collectors’ items. Saxophonist Koichi Matsukaze’s At The Room 427, originally recorded in November 1975 and released the following year on the tiny ALM label, is the latest, and it’s a true unearthed gem.

Matsukaze is a powerful player whose full tone and fierce blowing may bring to mind Arthur Blythe or other figures of the contemporaneous New York loft scene. He’s teamed here with bassist Koichi Yamazaki and drummer Ryojiro Furusawa, each of whom matches his energy throughout.

The opening track, “Acoustic Chicken,” closed out the third volume of the J Jazz series. It runs over 20 minutes, and includes a thunderous drum solo from Furusawa, doubtless the reason he gets a credit on the album cover. That’s followed by a very short version of “Theme Of Seikatsu Kojyo Iinkai,” a squawking solo interlude that builds to a funky, high-energy theme but fades out too quickly.

The album’s second side features two hard-swinging numbers, the Matsukaze original “Little Drummer” and a version of the standard “Lover Man.” Everything winds down with a second, nearly eight-minute version of “Theme Of Seikatsu Kojyo Iinkai.” Ultimately, this is a revelation, as fierce and exciting as anything being played at Studio Rivbea or anywhere else in New York at the time.