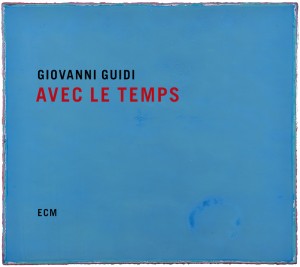 Pianist Giovanni Guidi’s Avec Le Temps opens with a penetrating take on the title cut, a somber French chanson by composer/lyricist Léo Ferré. But Guidi’s touch on the keys is so light, and his interplay with bassist Thomas Morgan and drummer João Lobo so thoughtful, that a quiet optimism subsumes the tune’s doleful message. (“In time, all love fades.”) By opening with such a known song, the only non-original here, Guidi establishes melodic sensibility as the album’s precedent.

On this record, as on his two earlier ECM releases with his trio, Guidi demonstrates an astute propensity for emotive melodies, a skill that he honed during his years with two of Europe’s finest creative musicians, trumpeters Enrico Rava and Tomasz Stańko—both masters of space, tone and tension. Similarly, the additional instrumentation on Avec Le Temps—guitarist Roberto Cecchetto and saxophonist Francesco Bearzatti contribute to most tracks—only heightens the kinetic intensity of the album’s originals. Bearzatti, doubling Guidi’s riffing on the group composition “No Taxi,” strengthens the tune’s bebop feel, and Cecchetto’s gentle picking on Guidi’s ballad “Ti Stimo” introduces the theme from which Bearzatti and Guidi launch satisfyingly out solos.

Like the album opener, the last tune here tugs at the heart. “Tomasz,” an homage to Stańko, who passed away in July 2018 at age 76, features the trio in an affecting melodic contemplation with an extended outro. The tune, a reluctant goodbye to an honored musician, seems to have trouble concluding. If in time all love fades, for Guidi that time hasn’t yet come.