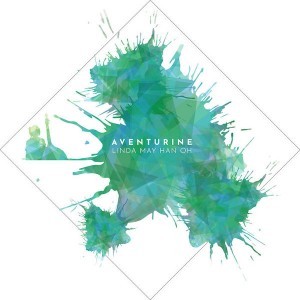 Because they normally work in the background, solo albums by bassists often are marked by long bass solos, or unaccompanied bass performances, or even just an unusually bass-heavy mix. To that extent, Aventurine sounds little like a typical bass player’s album, as leader Linda May Han Oh keeps the music’s focus on her ensemble, not her acoustic or electric bass.

It isn’t just a general lack of bass solos. There are long stretches in the elegiac “The Sirens Are Wailing” when Oh doesn’t play at all, instead letting the string quartet and saxophonist Greg Ward take the helm for much of the piece, mixing improvised lines with those Oh has written. It’s an amazing bit of writing, and quite a testament to Oh’s abilities as a bandleader, as shifts between the composed and the collectively improvised sections are utterly seamless. Moreover, there’s not even the hint of a bass solo in its whole nine minutes.

Although some might read that as evidence of Oh’s selflessness, a better take would be to see Aventurine as a reflection of the type of music she most wants to make: deeply compositional, strongly collective and drawing freely from a range of musical traditions. Hence her treatment of “Au Privave,” which uses Charlie Parker’s serpentine blues as the basis for a churning, polytonal set of variations on a theme, giving us an approach to melodic elaboration that encompasses both jazz and classical music. When the group begins “Song Yue Rao,” Oh states the melody and others join in, making the Chinese folk tune sound like an old-timey string band piece. But as more voices enter, rhythms are added, lines are improvised, and other keys are suggested, until the music owes as much to Ornette Coleman as to any folk tradition.

With 14 tunes unspooling during about 75 minutes, Oh covers a lot of ground on Aventurine, and it’s a testament to her musical vision that even after a dozen or more listens, the album continues to reveal additional depths. True, there isn’t much in the way of bass solos, but somehow, it’s unlikely anyone will mind.