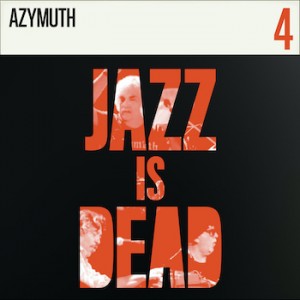 For the fourth release on their newly established Jazz Is Dead label, composers Adrian Younge and Ali Shaheed Muhammad team up with Azymuth, a long-standing Brazilian fusion trio. It’s a partnership forged through a mutual appreciation of groove, where the starting point is the relentless momentum of the trio’s samba-driven sound. Younge and Muhammad, star DJs and producers by trade, bring the sharp edge of hip-hop and the futuristic whir of electronics to bear. Their background in syncretism perhaps helped to actualize the gospel-blues intro, flutey Brazilian melody, jazz organ and Latin syncopation on “Friendship Samba.” And who knew that the melée of scratchy synthesizer, disco rhythm guitar and shifting time signatures would prove to be so much fun on “Apocolyptíco”?

Azymuth, the rhythmic engine for this ambitious undertaking, continues to distinguish itself as a creative force decades after its founding. On “Cat Jump” and “Fall Afternoon,” Alex Malheiros’ sleek electric bass provides just the right amount of tensile strength to hold the throaty sax, legato synth and forceful drum parts together. And keyboardist Lincoln Kiko Continentino displays not just a cool, modern sensibility through long-sustained chords and looping phrases on “Ao Redor Do Samba,” but a deep capacity for lyrical melodies on “Pulando Corda.” Drummer Ivan “Mamão” Conti, though, shoulders most of the responsibility for the album’s complex feels: the retro funk of “Sumaré,” the polyrhythmic swing of “Quiet Storm.” Throughout the album, grooves like these defy inertia.