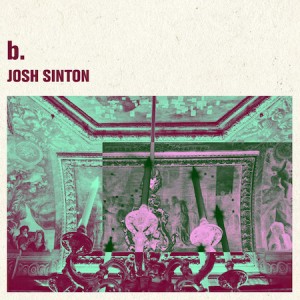 Josh Sinton opens a portal into the core essence of the baritone saxophone on b., the first of a series of albums the multi-instrumentalist, composer and bandleader plans to release over the coming year. It’s also his first solo album, and in many ways represents a culmination of nearly three decades spent performing, writing and refining his technique as well as listening to his sound mature and evolve on bari and bass clarinet. Akin to the avant-leaning solo saxophone albums recorded by the likes of the late Steve Lacy, Sam Newsome and Jon Irabagon, b. is an exploratory event. Sinton’s unaccompanied improvisations are purposeful and structured, complete compositions made in the moment and documented here using simple alphanumeric titles. The beauty of these pieces lies not so much in melodic lines and implied chord progressions, but in the impressionistic textures and timbres Sinton manipulates with such delicate precision, his use of breath effects and multiphonics, his deeply resonant upper register and his barking low end. Silence between notes and phrases is highly effective in helping the music breathe and in keeping the listener focused and in a state of perpetual anticipation. The 50-year-old Sinton plans three more album releases in 2022, including a trio outing reuniting him with pianist Jed Wilson and drummer Tony Falco (June 3), a solo recording of him performing six advanced-level etudes published by Lacy (Aug. 12) and a visionary project with his Predicate quartet (with trumpeter Jonathan Finlayson, cellist Christopher Hoffman and drummer Tom Rainey) titled 4 freedoms (Oct. 28). Gig alert: Sinton will share a twin bill with soprano master Newsome at iBeam in Brooklyn on Feb. 11. Each saxophonist will perform solo, followed by a set of the two performing together. If you find listening to b. a rewarding experience, expect the upcoming iBeam show — where the baby sax meets the big pipe — to be a highly satisfying, memorable event.