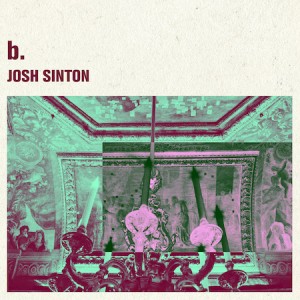 You don’t need to spend much time with the work of Josh Sinton to encounter this self-assessment; he is a not a quick study. The bio on his website characterizes his musical education as “backwards,” and one of his recent albums is named Slow Learner. So, it makes sense that he has waited until his 50th year to make a solo recording devoted entirely to his primary instrument, the baritone saxophone. b. is the first of several albums that Sinton plans to release over the coming year (including a solo recording where he performs Steve Lacy’s Book H of Practitioners).

While it might take Sinton awhile to get to a creative destination, once he’s there, you’ll certainly know that he has arrived. Even when he’s using materials that many other saxophone players use, he doesn’t sound like anyone else. The track titles are a tip-off. This music is not representative of anything other than the idea that Sinton wants to play.

On those terms, he sounds quite in control of his instrument, and very clear about what he wants to accomplish with it. Each track, however, is a cohesive expression of a musical idea. “b.1.i” is a quickly negotiated sequence of short phrases, concluded by a big intervallic jump. “b.1.iii” strings together longer pieces of material — trills, tones, screams and fluttering brays — each an elaboration of some aspect of the one that came before. And on “b.2.1,” Sinton works with unpitched sounds situated in the realm of near-inaudibility.

What Sinton is getting at is not at all abstract. The sounds he makes, the shapes they trace, and the undeniable physical and emotional impact one registers when a baritone lets loose, all fused into one, are the point of this music.