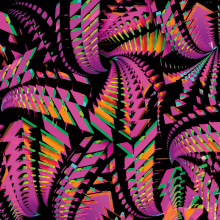 Chicago’s Bitchin Bajas, a synth-oriented trio in operation for the last dozen years, always keeps you guessing. The group released its last album of original material five years ago — Bajas Fresh, which displayed so much musicianship it seemed its prime movers, Cooper Crain, Daniel Quinlivan and Rob Frye, had employed a whole orchestra.

On Bajascillators, they walk it back, and it works perfectly for the times we’re living in five years forward. The group apparently upgraded a lot of its gear in the last half-decade and it shows in how refreshed they sound here.

“Amorpha” starts the album with a busily jingling drone that builds in your headphones to shifting percussive structures before overturning, continually building on its disparate yet aligned elements before settling into a burbling peace.

“Geomancy” begins more cautiously before taking up the entirety of your headspace with a gently blaring chord that makes room to explore errant melodies, moving into a transcendental, meditative, then scattered plateau for the track’s second half.

“World B. Free” is ambient to a level of feeling asleep at first before rising to an ’80s twinge, then becoming perhaps the album’s highlight with a highly sympathetic ally added in reedman and multi-instrumentalist Frye.

“Quakenbrück,” named after a town in northwest Germany, establishes fittingly Teutonic overtones to its instrumentation before blasting down the Autobahn to get steadily New Wave.

Bajascillators is the latest in Bitchin Bajas’ long continuum, and, in keeping with the best art, it’s exactly what we need right now. DB