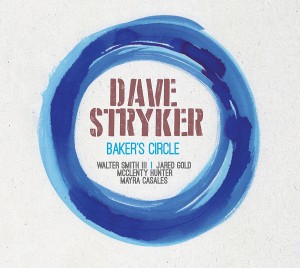 Veteran guitarist Dave Stryker has long thrived within organ combos, and on his latest outing he expands his trio with the addition of the versatile tenor saxophonist Walter Smith III, a player who serves as an excellent front-line partner while also routinely cutting against the grain of the format’s traditional sound. His presence injects a subtle tension into the straightahead proceedings. Smith’s stabbing solo on the leader’s opening original, “Tough,” for example, offers a master class on motific improvisation, as he pulls apart a series of hiccupping licks from every possible angle, standing in contrast to solos that surround him by the leader and organist Jared Gold. Stryker is not an innovator, but a devoted student of the music’s history, finessing, digging in and flourishing within post-bop convention.

“Dreamsong” is a steamy ballad that seems to pile up beats in the turnaround, precipitating an effective release that arrives with each solo. The humid sentiment in the group’s reading of the Carpenters hit “Superstar” feels a bit disingenuous, with a kind of furrowed-brow profundity that’s more treacly than tender. The group fares better on a funky interpretation of Marvin Gaye’s “Inner City Blues” and the ebullient shuffle it embraces on “Trouble (No. 2).”