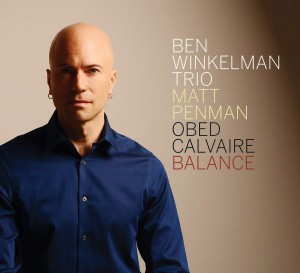 With the release of his sixth album as a leader, Australian-born, New York-based pianist Ben Winkelman continues to develop his concept of a piano trio whose primary artistic goal is to strike a balance between composition and improvisation. Bassist Matt Penman and drummer Obed Calvaire—both of whom never had played with Winkelman until this recording session—are featured as more than just sidemen/soloists. In crafting his meticulous arrangements, Winkelman treats his bandmates as if they were part of a small orchestra, providing them with detailed parts that are integral to the 10 original compositions on Balance. The music draws from Winkelman’s vast musical interests (including Afro-Cuban, gospel and classical influences) filtered through a jazz perspective.

Highlights include the odd-metered “Bx12 Part One” and “Bx12 Part Two,” the satisfying medium-tempo swinger “April,” the dreamlike ballad “Santiago,” the structure-meets-spontaneity of “Window Shopping,” the harmonic ambiguity of “The Trip” and a rhythmically challenging treatment of Thelonious Monk’s “Bye-Ya.” The intellectual meets the intuitive by design throughout the entirety of Balance as Winkelman’s trio of equals, perpetually seeking a state of equilibrium, approach joyful swing, hard-hitting rock and chamber-like inventions as one big, interconnected thing of beauty.