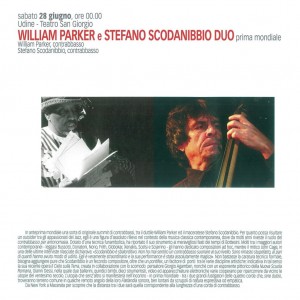 William Parker and Stefano Scodanibbio come from different musical traditions. The former is an American, who grew up hearing jazz and came up through a succession of free-jazz scenes based in New York. The latter is an Italian, who became a favored performer of new, composed music by Giacinto Scelsi, Terry Riley and Luigi Nono before dying of ALS in 2012. But they had in common a deep understanding and mastery of the possibilities of the instrument they both played, the contrabass. Scodanibbio met Parker at the Victoriaville festival, when the latter played a suite dedicated to another bassist, Percy Heath, and proposed on the spot that they collaborate. That encounter took place three years later in Udine, Italy, and now has been released on Parker’s own label.

The common ground between the two is the instrument itself. Every pass of the bow over strings is not just a phrase; it is an opportunity to unleash a meteor shower of whole and splintered tones and overtones. And every sequence of plucked notes is not just a line, but also a series of energy-projecting sonic detonations. For all the energy they expend, though, the music doesn’t feel combative. Rather, it’s a celebration of what the instrument can do. If you appreciate either musician’s work, you’ll want to hear their collegiality and robust virtuosity.