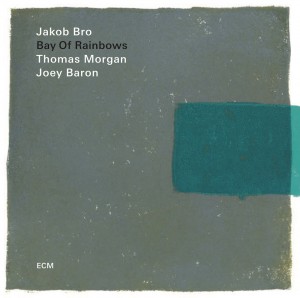 Danish guitarist Jakob Bro has said much of his music is constructed around melodies, but on this new album, melodies merely are suggested. That’s not a criticism; Bro’s music, closer to art song than pop, is atmospheric and painterly. And these six tunes, recorded during two nights at New York’s Jazz Standard, are shimmering sonic homes Bro built with bassist Thomas Morgan and drummer Joey Baron.

Bracketed by versions of “Mild” that access the same tune through different doors, Bay Of Rainbows is a minimalist album of maximal depth and beauty. The first “Mild” builds slowly, Bro’s guitar swelling from low coax to clarion declaration, before collapsing into Baron’s cymbals and brushes. In the concluding version, Bro toys with volume, working small variations to shush the shimmering wisp to silence.

Most of the tunes here feature similar dynamics, evolving organically and without flash. “Copenhagen,” a kind of round, is both economical and vivid in its very understatement. Bro is a man of few deeply played notes—his attack, no matter its force, makes a note ring until it’s spent—and Morgan and Baron deepen his sonorities with their own. Bro’s guitar is luminous, perhaps more at home with single notes than chording, and at times, one can’t tell where Bro ends and Morgan begins, as at the end of “Evening Song.”

Although repetition is part of his arsenal, Bro’s nuanced touch and resonant tone make his music both hypnotic and dramatic. “Dug,” a squall of a tune at the heart of Bay Of Rainbows, deploys wild electronics and shows how fearless this group can be. It puts the exquisite architecture of Bro’s calmer constructs into perspective.