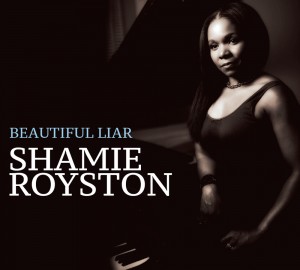 On the front cover of 2012’s Portraits, Shamie Royston peers through a sheer curtain, as if watching an event from afar. Kinda makes sense. The skilled pianist is recognized as an educator as much as she is a bandleader. A Colorado native who enjoyed regional acclaim on the Denver scene before moving East as her opportunities broadened, her name recognition isn’t commensurate with her broad range of skills. That might change.

Beautiful Liar’s artwork finds her front and center, ready for her close-up, and the music itself parallels that stance: mainstream post-bop with thoughtful interaction and a deep sense of poise. It swings hard and breathes easy.

An indication of her quintet’s confidence marks the aptly titled “Push.” The rhythm section ignites audacious solos from trumpeter Josh Evans, saxophonist Jaleel Shaw and the pianist herself. Like the best moments by Wynton Marsalis’ early fivesome, it’s a parade of pithy broadcasts with a devotion to standard structural templates and consummate legibility—a fierce mix.

A yin/yang POV boosts the program’s breadth. Turns out Royston waxes soothing as convincingly as she throws punches. There’s a spirited calm to the design of “Precious Lullaby (Outro)” and a pastoral vibe to the cascading horn lines of “Uplifted Heart.” There’s a bit of church in her soul stance as well, and those bluesy intimations, along with a dash of simmering fervor, boost her ballad game.