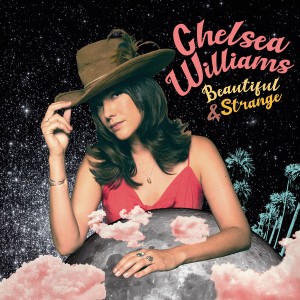 Los Angeles-based singer-songwriter Chelsea Williams is a keen observer of the human condition, and perhaps her years busking on the streets of Santa Monica helped hone that aspect of her personality—along with the ability to craft catchy melodies that could grab the attention of busy pedestrians.

Teaming with her husband/producer Ross Garren, Williams has sculpted a sparkling gem with Beautiful & Strange, a 40-minute program chock-full of earworms and more hooks than a tackle box. With Sheryl Crow and Jackson Browne as influences, Williams traffics in Americana-flavored pop-rock. Although her style has a thoroughly engaging accessibility, the album features some quirky instrumentation and deft production touches—including cello, glockenspiel, toy piano, Mellotron and musical saw—that distinguish Williams from many of her better-known peers. Songs like “Wasted” and “Red Flag” are so lush and catchy that they would fit snugly on the soundtrack to a Hollywood rom-com.

As addictive as Beautiful And Strange is, though, it does not contain what is perhaps Williams’ strongest composition, which was written after the album had been released. Outraged by the effects of systemic racism, Williams posted a powerful music video for “No Justice, No Peace,” in which she sings, “My face, my hair, my skin have never been/ A threat to my security/ I know I’m no authority, but I will kneel down/ In solidarity/ What do I see/ What do I see/ Ten thousand feet marching in the streets.” Williams accompanied the video with a statement explaining that she previously had been hesitant to speak out on social or political issues, partially out of fear of alienating prospective fans.

Armed with a lovely voice, an impressive vocal range, a deep understanding of songcraft and a newfound willingness to write protest material, Williams definitely is an artist to watch.