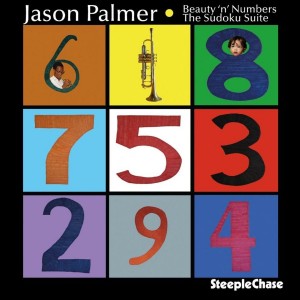 Before saying anything about the compositional method behind the pieces on Beauty ‘N’ Numbers, I’m going to write a few words about the way it sounds. It’s such a lovely record it would be a shame to miss the music for the conceit. Trumpeter Jason Palmer assembled a suite of subtle, unpresuming charts for his quartet, which they positively devoured in the studio.

An ambitious young leader with eight CDs under his belt, Palmer is possessed of a delicate touch on the horn, tossing passing notes like skipping a stone. He’s rarely brash, but his upper register work is fluid and exceptionally controlled. And he’s a terrific improviser, as demonstrated on the unaccompanied opening to “Of Fun And Games,” which is fluttery and virtuosic even in its softness. Palmer’s working band takes to his music expertly, navigating its internal logic and making a piece like “So,” with an unfamiliar design, feel natural as day.

If you read the track titles in a row, as below, you get a pretty good idea about Palmer’s impetus for writing what he subtitled “The Sudoku Suite.” Having identified his condition, he used the numbers game to simultaneously self-treat and compose music, having devised a way to think of the digits in relation to the tunes.

It rarely feels like math, though there are some intricate patterns. Unexpected turns often come from constraints, and the music navigates between a hip feel and something quite personal, intimate, and unique to Palmer. With or without the notion of arithmetic, there is indeed beauty in these numbers.

Beauty ‘N’ Numbers: The Sudoku Suite: Beauty ‘N’ Numbers; Obsessive; Compul- sive; Disorder; Is; Now; Under; Control; Thanks; To The; Guidance: Of Fun And Games; So; If You Would; Allow Me To Be; In The Moment. (75:76)
Personnel: Jason Palmer, trumpet; Mike Moreno, guitar; Edward Perez, bass; Lee Fish, drums.