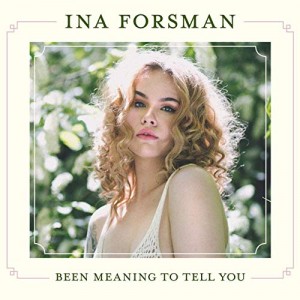 In the middle of Ina Forsman’s excellent new r&b album are two gutsy, related songs that are apt for the #MeToo movement. The 49-minute program features a Rashomon-like twist with tracks “Whatcha Gonna Do” (about a physically abusive man pursuing a woman as she’s walking down the street, with a focus on the male point of view) and the no-means-no anthem “Why You Gotta Be That Way” (featuring a female narrator who rebuffs a man who is pursuing her as she’s strolling down the street). These pair of songs, as well as “Miss Mistreated” (“Did you ever put some makeup on your face just to fade all the scars and bruises?”) reflect a seriousness of purpose. This 25-year-old Helsinki native has emerged as a contemplative songwriter—in addition to being a vocal powerhouse, who has conquered stages on the international blues festival circuit.

Forsman’s eponymous debut (released by Ruf in 2016) features a version of the blues standard “I Want A Little Sugar In My Bowl,” but on Been Meaning To Tell You, she wrote all the lyrics and wrote or co-wrote all the music. Her sense of humor and swagger slide into the funk and hip-hop-influenced “Get Mine,” as she sings a clever line with an onomatopoeic sneeze inserted: “I’m here to tell you/ That this beat is sick like ah, ah, ah-choo/ Now bless me/ I’m what they call the good kinda cocky/ That means I’m the best but I don’t say it.” Forsman does possess a mighty big voice. She might not have the transcendent pipes of, say, Adele or Jennifer Hudson, and she occasionally indulges in an extraneous vocal flight to show off her impressive range, but this newcomer is powerful entertainment personified. One might not think of Finland as a source for hard-earned, engaging r&b—but think again.