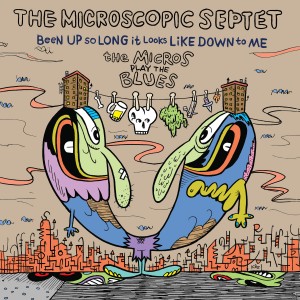 The Microscopic Septet’s 2010 album, Friday The Thirteenth, had a subtitle—The Micros Play Monk—which conveyed essential info about the program. The band’s new album also has an informative subtitle—Been Up So Long It Looks Like Down To Me: The Micros Play The Blues. And this is definitely blues of a swinging variety. Whether the band is playing a composition that is intricately complex or relatively simple, the Micros have an abiding commitment to make their music swing. The program consists of six original tunes by each of the two co-leaders—soprano saxophonist Phillip Johnston and pianist Joel Forrester—along with a cover of the 1950 r&b hit “I’ve Got A Right To Cry.” The latter is the only vocal track here, and baritone saxophonist Dave Sewelson’s slightly gravelly lead vocals provide a smile-inducing conclusion to this 62-minute gem of an album. Johnston once described the band’s modus operandi this way: “Break all the rules and respect all the saints.” That ethos results in tunes that mix eccentric originality with hints of Ellingtonia, as delivered by a scrappy septet. “12 Angry Birds,” which is one of the more traditionally bluesy tunes, seems to celebrate early Ellington, offered with a song title that apparently nods to Sidney Lumet’s classic 1957 film 12 Angry Men and the video game Angry Birds. It’s that type of intellectual mash-up, looking forward and backward simultaneously, that makes a Micros album such a treat. Even more noteworthy is Forrester’s “Silent Night,” an original composition with two sections that quote from the famous hymn. Elsewhere, Johnston’s “When It’s Getting Dark” has a vibrancy reminiscent of Henry Mancini’s Peter Gunn theme and Neal Hefti’s Batman theme. Throughout this entire album, the sense of swing is sturdy, and the fun factor remains high.