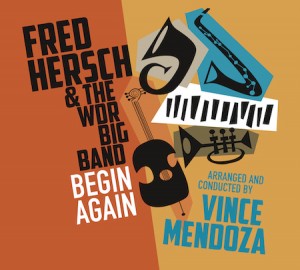 Fred Hersch has been especially reflective these past few years as he releases different presentations of his personal history. Two years ago, he published his intense memoir, Good Things Happen Slowly: A Life In And Out Of Jazz, and now he digs back into early compositions and presents them in bold colors alongside The WDR Big Band for Begin Again.

A spirited dialogue shapes the title track, the one piece here that previously hadn’t been recorded. Throughout its rhythmic changes and building dynamics, Hersch’s lyrical tone and drummer Hans Dekker’s deceptively light approach form a stunning contrast to the orchestra’s weightier movements. Hersch’s time-feel also accentuates “Havana,” which doesn’t make any obvious Cuban statements, although echoes of danzón subtly filter through. As Hersch delves back to his early-1980s “Rain Waltz,” his repeated motifs co-direct the combined horns’ upward movement. On the haunting “Out Someplace (Blues For Matthew Shepard),” Hersch and the ensemble use stark silent passages, ominously building to the scream honoring hate-crime victim’s memory.

Begin Again ends with “The Orb (For Scott),” an ode that Hersch wrote for the theatrical production My Coma Dreams—a work about transcending a near-death experience. He performed it solo on 2017’s {open book}, and the new revisit conveys a similar sense of inner calm. But as the WDR woodwinds sweep in to fill the spaces that his hesitations create, Hersch sounds assured that he’ll never walk alone.