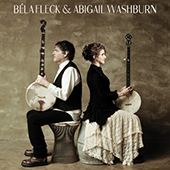 Banjoist Béla Fleck has topped DownBeat polls many times, including wins in the Miscellaneous Instrument category of the Readers Poll in 2013 and 2014. Fleck and his wife, the banjoist-vocalist Abigail Washburn, are the only musicians who appear on their new, self-titled duo album. They previously worked together on Washburn’s Sparrow Quartetproject, which explored Asian influences and found her singing “Taiyang Chulai,” a traditional Chinese folk song from the province of Sichuan. In 2009, Fleck released The Melody Of Rhythm—a collaboration that featured the Detroit Symphony Orchestra and percussionist Zakir Hussain on tabla—as well as Throw Down Your Heart, which was recorded in Africa with musicians from countries such as Uganda, Tanzania and Mali. On the duo’s eponymous album, however, they don’t explore world music styles, focusing instead on American roots music. The program features intriguing arrangements of traditional folk songs such as “Pretty Polly,” “I’ve Been Working On The Railroad” and “What Are They Doing In Heaven Today?” The musicians also composed material that has the feel of traditional tunes, such as “Little Birdie,” a tale akin to one of Aesop’s Fables, and “Shotgun Blues,” a Washburn original that was inspired by Appalachian murder ballads, but this time, the female character is toting the firearm. This impressive 12-track album is centered around the interplay of two banjos, and on some tracks, Fleck plays a low-tuned, five-string Gold Tone baritone banjo, which has a large resonating area to give low notes more depth. The duo’s 2015 tour includes concerts at the Avalon Theatre in Grand Junction, Colorado (Jan. 17), the Sangamon Auditorium in Springfield, Illinois (Feb. 20), and Carnegie Lecture Hall in Pittsburgh (April 11).