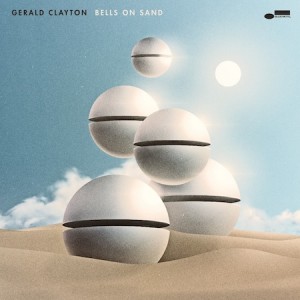 Welcome to pianist Gerald Clayton’s best recording to date, and that’s saying something. The 37-year-old pianist has produced a stretch of really fine music since his debut as a leader in 2009 with Two-Shade (ArtistShare), including Bond: The Paris Sessions (EmArcy), Life Forum (Concord) and Tributary Tales (Motéma). He made his debut on Blue Note in 2020 with the terrific Happening: Live At The Village Vanguard, and continues with Bells On Sand, his latest release for Blue Note. The combination of his artistry on that iconic label pays off here in a major way. Bells On Sand is a beautiful album that crosses through the broad spectrum of Clayton’s interests, tastes and thoughts with rich cohesiveness. While many artists string together songs like a writer would an anthology of short stories, Clayton paints as a novelist, delivering the arc of his story with breadth and grace. This is an album where quiet understatement makes a huge impact. It’s a small group performance that mixes jazz with classical overtones to deliver a cinematic approach to the music. The opening tune, the carefully paced “Water’s Edge,” features Clayton’s father, famed bassist, composer and arranger John Clayton, playing achingly heartfelt arco bass with drummer Justin Brown adding regal touches with mallets. Gerald Clayton adds a quiet wash of organ behind his piano soli, a great effect that helps set the mood. That piano artistry is featured in a solo format on four of the tunes on this recording — “Elegia,” “My Ideal 1,” “My Ideal 2” and “There Is Music Where You’re Going My Friends” — each one a true treat with the two versions of “My Ideal” coming from totally different universes. Clayton also brings in the breathy vocalist Maro for two songs, the jazz noir of “Damunt de tu Només les Flors” and “Just A Dream.” The chanteuse captures an otherworldliness that transports. But there are two tunes that simply pull at the heartstrings for very different reasons. “That Roy” is a tribute to the late trumpeter Roy Hargrove, who passed away in 2018. This is a tune very different from everything else on the record, but still fitting. With a laid-back, hip-hop beat by Brown and Clayton on keyboards, it sounds like Hargrove, who served as a mentor to many of the younger musicians coming to New York, including Clayton. Continuing the theme of mentors, when Clayton conjures with saxophonist Charles Lloyd on “Peace Invocation,” it serves as a few moments of sheer joy. Clayton plays in several of Lloyd’s projects including the Charles Lloyd & Gerald Clayton Duo. Their shared connectivity is apparent as the two weave their way through a ballad for our times. On the whole, Bells On Sand reflects on our pandemic times, seeking a better path forward. It’s lovely, start to finish, which is the reason John and Gerald Clayton are on the cover of the June issue of DownBeat.