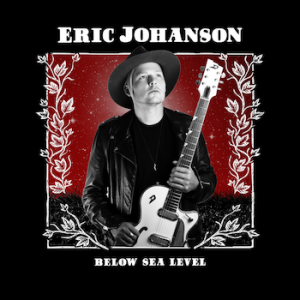 Twenty years ago, brothers Luther and Cody Dickinson burst onto the national blues scene as members of what was then a blues power trio called the North Mississippi Allstars. Today, that band is still going strong and the siblings continue to find fresh ways to revitalize blues-rock, as evidenced by Below Sea Level, the new trio album by singer-songwriter Eric Johanson. Luther produced the disc, Cody plays drums on it, and Johanson recruited electric bassist Terrence Grayson for this collection of a dozen original compositions. It is the third album by Johanson (who has toured extensively in Cyril Neville’s band), and the Dickinson brothers help bring out the best in him as a both a charismatic vocalist and a blistering guitarist.

The album opens with the blues-boogie stomp of “Buried Above The Ground,” and there are plenty of other barn burners here—like “Down To The Bottom” and “Nowhere To Go”—as one would expect, given the personnel involved. But Johanson also shows a deeper side to his compositional acumen with a pair of socially conscious numbers. “Have Mercy” describes life on the streets of his current home, New Orleans, where homelessness, drug addiction and gun violence have been problems, and the sludgy “River Of Oblivion” offers an unflinching look at the tragedy of overdoses. The Louisiana native’s use of distortion pedal adds to the harrowing mood of his lament.

Johanson ends the program with two tunes that are lighter, both thematically and sonically. He demonstrates both his acoustic and electric guitar prowess on the philosophical “Love Is Rebellion,” and he straps on a resonator guitar for an unaccompanied closer, “Riverbend Blues.” These songs provide the listener with an exhalation, a satisfying denouement following the hair-raising ruckus that the trio unleashes across much of this memorable program.