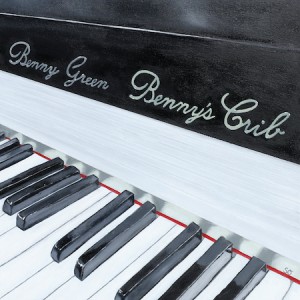 For many of the best second- and third-generation bebop pianists, the electronic keyboard remains an occasional time-share, rarely a residence. But here we have Benny Green on Benny’s Crib—a gentle, soft-spoken, well-mannered trio set—in which he takes a rare plugged-in side trip.

As a change of tone and texture, it is nice enough, though he seems reluctant to deeply immerse himself into its many options. Only on “Coral Keys” does Green dip sparingly into the keyboard’s synthesizing potential, producing some soothing ponds of ambiance. The essential approach here remains very “Benny Green,” his elegance lightly airbrushed by the frosted filterings of the semiconductor aesthetic.

Green refreshes four previously recorded pieces, and for its third outing, “Harold Land” is bookended with a pleasant cameo by flutist Anne Drummond, though Green provides the even-tempered solo center. “Central Park South” reaches back to the bandleader’s Blue Note days and gets a smart but restrained performance.

Much of Benny’s Crib actually lingers in a similar gear, moving from dreamy meditation to well-dressed but modest energy. Only once do things spring to life: The title track, originally an instrumental on Green’s Magic Beans, jumps to attention with a crackling Annie Ross-style vocalese turn by Veronica Swift, who steers the sharp boppish turns of phrase with a meticulousness exultation. I expect little from vocalese because of an inherent contradiction between the freedom of improvisation and the rigor of language. But it’s welcome here as the high mark in a low-key session.