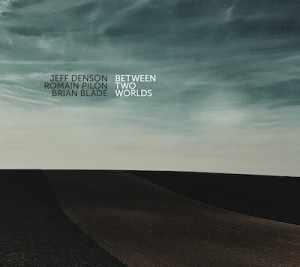 When today’s jazz artists express a sense of being between worlds, it’s tempting to expect a genre-splicing result. For Bay Area bassist Jeff Denson, his record’s title instead reflects a philosophical matter, one concerning the divide between the physical world and one dedicated to ephemeral pursuits, like music. As a result, his latest album carries a straightforward, post-bop sound, but the music remains the product of distinct perspectives blended into a generally seamless whole. Splitting writing duties with French guitarist Romain Pilon, Between Two Worlds traces the cleanly drawn lines of a modern guitar trio, no matter whose music sits at the center (which is held together by the imagination of drummer Brian Blade). Among Denson’s compositions, “Song Of A Solitary Crow” is a standout, with Pilon’s guitar shifting into a gruff, bluesy drive that finds some unexpected corners. Highlighted by Denson’s mournful bow work against a flickering backdrop from Pilon, the album’s title track carries a rewarding darkness that’s shaded by Blade’s muted touch. In bringing together its voices so capably, the record at times lags into a pleasant but monochromatic tastefulness through its medium-tempo pacing, which is rewardingly disrupted by a few quicksilver turns from Blade on “Listen Up.”