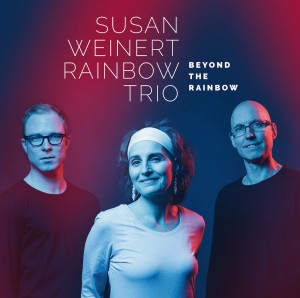 German guitarist Susan Weinert’s 13th album, Beyond The Rainbow, joins the forces of her guitar playing at its expressive best with the classical chops of young pianist Sebastian Voltz and the lyrical bass playing of the bandleader’s longtime partner in life and music, Martin Weinert, for eight tracks, all recorded live at a summer performance during the Studio Konzert series at Bauer Studios in Ludwigsburg.

The music shimmers and shines as it creates sonic dreamscapes in a finely balanced dialog in which none of the three musicians dominate the musical conversation, and all are able to add their voice, perspective and beauty, with piano and guitar texturing the tunes, their notes gently laid upon the bass solos.

The trio’s original compositions—six composed by the bandleader—unfold as grooves are lightly tinged by world music-esque nuances. They also highlight the precision and clarity of Voltz’s background as a classical concert pianist, his melodies weaving with an almost meditative quality to evoke what the titles portend—windmills, light, cranes and more. “Eisblume,” which translates to English as “frost flowers” or “frost patterns,” practically crackles as it evolves in seemingly random delicacy.

Don’t let the lovely meandering of these tunes lull you into letting them slide into the background. This is vibrant, soulful and sophisticated music, and much like the cranes’ flight that inspired “Die Kraniche,” it delights ears and mind, gently lifting the spirit and allowing it to soar.