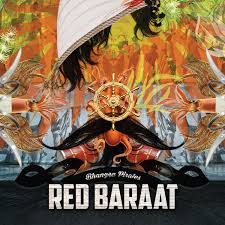 Sunny Jain cuts a striking figure as the leader of the high-octane, Brooklyn-based octet Red Baraat, as he energetically pounds out mesmerizing rhythms on the dhol (a double-headed drum). Jain has said that the purpose of Red Baraat is “to bring joy and togetherness”; it’s a goal he routinely accomplishes in concert, and on a new studio album, Bhangra Pirates. Electric guitar is now a consistent element of the Red Baraat palette, resulting in a frequently aggressive sound, as on “Bhangale,” featuring Delicate Steve’s wicked fretwork. Elsewhere, guitarist Jonathan Goldberger offers both the crunch and scream of rock guitar on the title track. The grooves on this album are canyon-deep, the lyrics often chanted, and the vibe evokes a sweaty dance party. Much of this music has the furnace-blast intensity of punk or metal, but it’s delivered in a world-music aesthetic, thanks to instruments such as trumpet, trombone, sousaphone, drum kit and various saxophones. On the track “Akhiyan Udeek Diyan,” Sonny Singh’s trumpet solo and Mike Bomwell’s muscular work on soprano sax demonstrate that when Red Baraat decides to tone down the more aggressive edges of its attack, the result is still a completely dance-worthy groove. Fans who enjoy shaking their hips to Trombone Shorty or Snarky Puppy might want to check out the kinetic party vibe that Red Baraat offers. The band will perform at Brown’s Island in Richmond, Virginia, as part of the Friday Cheers series on May 12, and at the Fringe Fest in Virginia Beach, Virginia, on May 13.