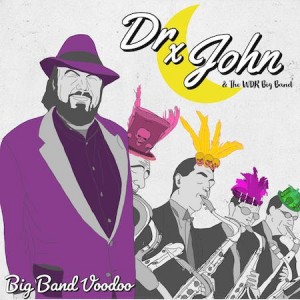 “Ya know, dis would be dat thing I was always using my head for: a big band thing with my New Orleans riffs.”

Thus spake Mac Rebennack, a.k.a. Dr. John, while tossing around ideas with his manager Stanley Chaisson ahead of a 1995 tour. Not long afterward, he manifested that vision in Cologne, Germany, where he recorded 16 tracks with the WDR Big Band. It remained on ice, until now.

On the opening “Indian Red,” Mac name-checks Mardi Gras Indian tribes and soars to new heights when WDR jumps in with the gale-force gusto of a truly big band, summoning a real second-line rave-up. “New York City Blues” swings with enough swagger to light up Times Square, while “I’m Just Lucky” invokes the glitz of Vegas in its Rat Pack heyday. Both put a new spin on songs from Afterglow, the 1995 album Dr. John was touring behind, which also included moodier pieces like “Gee Baby.” Though not every track is one for the ages, this live set makes a fine addition to every Dr. John fan’s library, and delivers exactly what the good doctor intended to conjure: Big Band Voodoo.