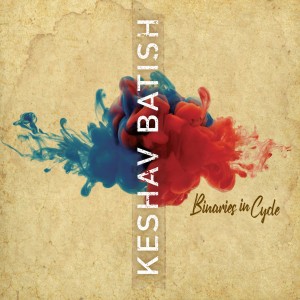 The word “binary” indicates a state of either/or-ness. As a self-described queer artist of color who has engaged in musical pursuits rooted in different cultures, Keshav Batish has had to consider a variety of such circumstances at close quarters. He grew up learning Hindustani classical music the old-fashioned way: from his father, sitarist Ashwin Batish. Keshav played his first concert at age 7, and went on to master several Indian instruments, but then turned to jazz and classical music.

Binaries In Cycle is his recording debut as a jazz drummer and bandleader, and it is true to its title. Batish does not indulge ostentatious hybridism. While the melody and meter of “Gayatri” draw upon Indian models, the tune’s harmony and ensemble sound are rooted in the mainstream of contemporary jazz. Which is to say that while “Let Go” builds up a respectable head of steam, its direction is never in doubt. The ensemble’s brisk energy reflects the fact that the album was recorded on a stage, albeit without a visible audience. The band fairly flies on Ornette Coleman’s “Police People,” and Batish’s most engaging playing comes when he articulates the melodic contours of Thelonious Monk’s “We See.”