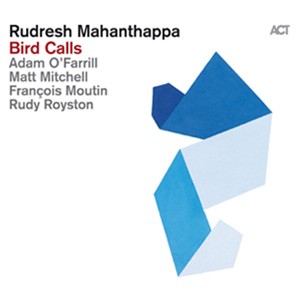 I’m a card-carrying member of the Rudresh Mahanthappa fan club, and Bird Calls—the latest album by this fantastic alto saxophonist—explains why. The recording honors one of Mahanthappa’s earliest and most endearing musical heroes, Charlie Parker. But rather than running through a set of Parker standards, Mahanthappa delivers a program of new tunes, each inspired by a classic Parker song or solo. “This album is not a tribute to Charlie Parker,” Mahanthappa writes in the liner notes. “It is a blissful devotion to a man who made so much possible.” Like Bird, Mahanthappa has developed a sound, attitude and musical language that is uniquely his own. He melds the musical influences of his Indian roots with jazz that’s ultra modern. He changes things up so dramatically that you’ll be scurrying back to your Parker collection to see if there really is a Bird connection to the song. Believe me, there is. It’s fun to listen to each of Mahanthappa’s tracks next to the Parker tune that inspired it: “On The DL” next to Bird’s “Donna Lee,” or “Gopuram” next to “Steeplechase,” or “Man, Thanks For Coming” next to “Anthropology,” or “Talin Is Thinking” next to “Parker’s Mood.” Mahanthappa’s fantastic tunes certainly stand on their own, but doing an A/B comparison with Parker’s work is a blast. One key reason this project soars is that Mahanthappa assembled a terrific band for the sessions: Matt Mitchell on piano, François Moutin on bass, Rudy Royston on drums and 20-year-old Adam O’Farrill on trumpet. Some of the cooler passages here come when O’Farrill and Mahanthappa are playing rapid-fire unison lines or trading fours. They have great chemistry together. The music is great. The playing is great. But what I love most is the ambition that’s behind this recording. Mahanthappa once again has gone down the road less traveled, and he’s brought back a record that would make Charlie Parker proud.